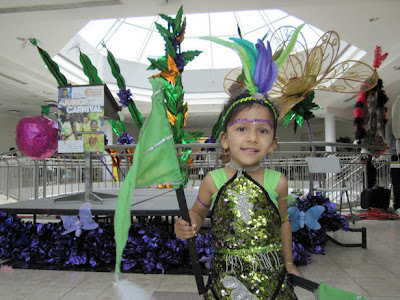 Makayla Browning, 3, dances at a pre-parade event at Yorkgate Mall on Tuesday.
She will be marching at the Junior Carnival Parade on July 16.
TheStar Carnival’s parade route altered for junior performers

The sequined 3-year-old continued to wave her green flags at passersby even as other masqueraders were packing up their head pieces at Yorkgate Mall.

She’s one of a few dozen who performed at the mall for a pre-Junior Carnival Parade event, held to show off some of the elaborate costumes they’ll wear at the parade, and one of the more outgoing kids.

Festival organizers are altering the route for the day of the parade to help those a little less performance inclined.

“Some of them got nervous,” he said. The judging tent is being moved to Jane St. this year.

“The kids will be warm and more energized,” he explained.

The move also makes room for more spectators as they can line up along Jane St. to watch. About 2,000 kids are expected to march and perform in the parade, a few hundred more than last year.

By the time the kids get to the tent, which will be near the midway point of the 2-kilometre route, Delfish hopes they’ll have gotten over any jitters.

Reayanna Coley, 6, isn’t so sure. The Grade 1 student danced at Yorkgate Mall on Tuesday but said she wasn’t used to performing in front of strangers.

About 20,000 people are expected to attend this year’s junior parade, which takes place on July 16 at 11 a.m. The parade will start just south of Black Creek Pioneer Village and work its way to Yorkgate Mall at Jane St. and Finch Ave.