Large Junior Band of the Year

Medium Junior Band of the Year

Small Junior Band of the Year

Mini Junior Band of the Year

Email ThisBlogThis!Share to TwitterShare to FacebookShare to Pinterest
Labels: Band of the Year, Trinidad and Tobago Carnival 2009

The ABC's of Carnival

I spotted this article in the online version of the T&T Express and thought is was really cute. Hope all masqueraders are having a time on de road!!!

The ABC's of Carnival
by Marguerite Gordon (Trinidad & Tobago Express)

A is for attention - be aware of what is going on around you, who's looking at who, where your partner is and where you are.

B is for bold - some of these players are very...well bold. So you have to be a bit bold too. Dance with others and let others dance with your partner, but know how to firmly reclaim your 'territory'. B is also for the band, and no, not the musical kind, but a band of masqueraders in their costumes moving together and having a ball in the streets.

C is for Calypsonians, those wonderful, witty and (mostly) wise men and women who are the stars of this festival. C is also for "chipping", that laid back, slow, easy way to move in your band and last for two days. Don't forget to bend your knees!

D is for the drinks and daredevils. Drink and be merry, but always have a designated driver; and dare to do something crazy, like dying your hair to match your costume, or flirting with someone you never did before and do not intend to do so after Carnival.

E is for energy. You have to have a lot of it. Make sure you walk and or join a gym before Carnival to get ready for your time on the road.

F is for fun, fun, fun, as well as some innocent flirting.

H is for the hot and spicy soup, especially the corn variety in Trinidad, that is a must at Carnival time.

J is for jumping up in the band.

K is for kiss; a quick one stolen from someone you've had your eye on. Just be sure they don't belong to someone else!

L is for loving your life and all the fun you're having at Carnival.

M is for manners. If you bump into someone or step on some toes, still apologise quickly; you can never be having so much fun that you forget your manners. And M is for mas too, that's what you're playing!

N is for no, thank you. Feel free to use it whenever: if you don't want to dance, or accept that drink from a stranger, or go mingle with a different group.

P is for the pandemonium of the music and the sweet sound of the steel pans, the heart and soul of Carnival.

Q is for quick. You have to move quickly to get up front, to get that drink, to get back to your wayward partner. Just who is she/he flirting with?

R is for rest. Catch up on some down time when you have the chance; the best time is when the band is resting too. Just grab a seat and rest your feet.

S is for swivel neck action, that quick, smooth turn of the head when players are looking at some gorgeous member of the opposite sex.

T is for tight. Try not to have you or your costume too tight.

U is for useless, as in why try and stop the bacchanal? Just give in!

V is for victory. You are sure your band has won, the crowd adored your costumes, and you have survived two days on the road!

W is for wining and water. Drinks lots of water to stay hydrated as you gyrate your hips - that's the wining that doesn't involve grapes - to the Carnival beat.

X is for X marks the spot, when he or she finally caught your eye.

Y is for yummy. Did you see that fine looking specimen that just passed?

Z is for zealot, a Carnival zealot that is, because that's exactly what you'll be after one trip to Trinidad and Tobago for carnival!
at February 23, 2009 1 comment:

Email ThisBlogThis!Share to TwitterShare to FacebookShare to Pinterest
Labels: Trinidad and Tobago Carnival

With March Break fast approaching you may be thinking of activities for the kids that won't break the budget during the recession. Well check out the Museum and Arts Pass (MAP). Family Passes are available for many of Toronto's museums, galleries and more. All that is required is a valid Toronto Library Card and you're good to go.

Check out the link for more info: http://www.torontopubliclibrary.ca/spe_ser_museum_arts_pass.jsp
at February 22, 2009 No comments: 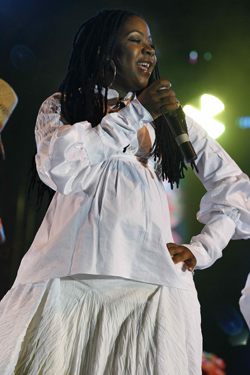 Admission is $40. Seating will be available at the Down Town Stands, South Quay, Port of Spain. Competition starts at 7:00 pm

King of the Rock:

Order of appearance of the finalists on Sunday, February 22, 2009 at Queen's Park Savannah. 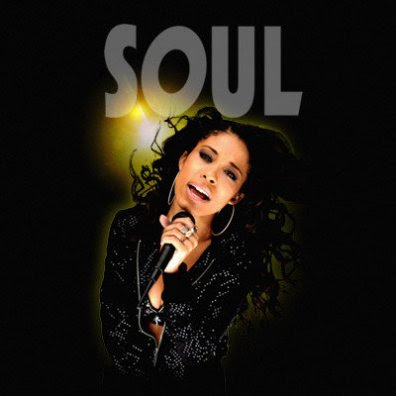 I completely missed the premiere of SOUL last week but you can catch tonight's episode at 9 p.m. on Vision TV. This new Canadian TV series was filmed in Halifax and features Canadian R&B songstress Keshia Chanté in the lead role.

About The Series
SOUL revolves around Mahalia Brown.

A young gospel singer with the Keystone Sanctuary Youth Choir, Mahalia has an unforgettable voice and an overwhelming passion for music. It's her elixir of life.

It's also her potion for commotion. When she puts it out there, nobody can resist. Not her choir director Dee Dee Washington. Not gospel powerhouse Isaiah Hunter from Cleveland Temple. And certainly not R&B producer Jamil Foster.

By the end of the first episode, Jamil has discovered Mahalia. He whispers eductively: "God has given you an amazing voice; let me make you a star."

But Mahalia also hears the voice of her father, Pastor Clinton Brown: "I named you Mahalia for a reason. Serve God and God alone. He'll take your voice where it needs to go."

Mahalia is at a crossroads. She loves the church, she loves God … but she also has a musical gift that she wants to share with the whole world. Can she have it all? Can she be spiritual in a material world? SOUL follows her struggle to answer this question.

Mahalia's older brother Malcolm has no such concerns: he wants to be a music producer, and the type of music doesn’t matter. To this end, he's hooked up with Jason, a white DJ with street cred, and with the United Nations, a street gang with big ambitions, led by the formidable Shaka.

Mahalia's father, the pastor of Keystone Sanctuary, has concerns of his own. He’s the one who brought Dee Dee, a former R&B star, into the church. But Dee Dee's troubled past and her approach to leading the choir has ruffled some feathers. Meanwhile, Clinton's wife Roslyn is doing her best to make sure Dee Dee doesn't find her way into the good pastor’s heart.

With best friends Samson and Alicia beside her, Mahalia is setting out on a quest that will take her through many worlds — churches, clubs, gangs, studios — as she tries to make peace between her ambitions and her beliefs. But those friends start to turn away when the journey inspires jealousy and reveals harsh truths — about them, and about Mahalia herself.

SOUL is a series about music and faith in an urban world. It's about honesty, connection and growth — and about trying to do the right thing, no matter what the cost.

Visit the SOUL website for more info about the show: http://www.soultv.ca
at February 18, 2009 No comments:

Mr. Playhouse, Jef and the whole Toronto-Lime crew are back with Trinidad Carnival 360. Coverage begins tomorrow so be sure to check out the link to see what mischief they get into this Carnival season.

Here are the 15 contestants selected to perform at Dimanche Gras, to be held on Carnival Sunday night, at Queen’s Park Savannah, Port-of-Spain:

Check out http://www.ctntworld.com for live streaming of various Carnival events.
at February 15, 2009 No comments:

Email ThisBlogThis!Share to TwitterShare to FacebookShare to Pinterest
Labels: Trinidad and Tobago Carnival 2009

Here are the steelband finalists scheduled to perform on Saturday, February 21, 2009 at the Queen's Park Savannah (not in order of appearance)

(not in order of appearance)

Here are the semi-finalists scheduled to compete at Calypso Fiesta on Saturday at Skinner Park, San Fernando (shocking vibes: The Mighty Shadow is a reserve!!!)

Here are the finalists for Fantastic Friday......February 20 @ Hasley Crawford Stadium

International Power Soca Monarch category (not in order of appearance)

International Groovy Soca Monarch category (not in order of appearance

Da Kink in my Hair

Hey everyone, da Kink is back!!! The season premiere is on Thursday, February 12th, at 9:30 p.m. on Global
http://www.globaltv.com/globaltv/globalshows/dakink/index_week13.html
at February 09, 2009 No comments:

Email ThisBlogThis!Share to TwitterShare to FacebookShare to Pinterest
Labels: da Kink in my Hair 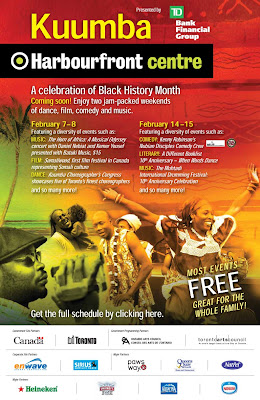 Visit the Harbourfront Centre website for the complete Kuumba schedule: http://www.harbourfrontcentre.com/kuumba/
at February 04, 2009 No comments: 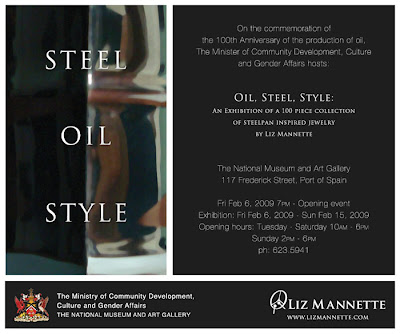 Boo to all Groundhogs!!

Well its official......another six weeks of winter according to our furry friends. Happy Groundhog Day!!

Furry forecasters Wiarton Willie, Shubenadacie Sam, and Punxsutawney Phil all saw their shadows on Groundhog Day, meaning another month and a half of frigid cold and snow.

Wiarton Willie is one of Canada's most famous weather prognosticators, and for the last four years in a row he hadn't seen his shadow, signifying an early spring. And over the past 20 years he's only seen his shadow seven times on Groundhog Day.

Those hoping it would be the same story this year were disappointed when he sided with his prognosticating brethren, including Nova Scotia's Shubenadacie Sam and Pennsylvania's Punxsutawney Phil.

Closer to home, BT Bartholomew also saw his shadow, meaning there's seemingly no doubt that we're going to have to endure this already brutal winter a little while longer.