Get On Board The Freedom Train!

I just stumbled across this very cool event hosted by Ms. Itah Sadu of A Different Booklist.  August 1st marks the anniversary of the Abolition of Slavery by the British Empire and I think this is an excellent way to celebrate. 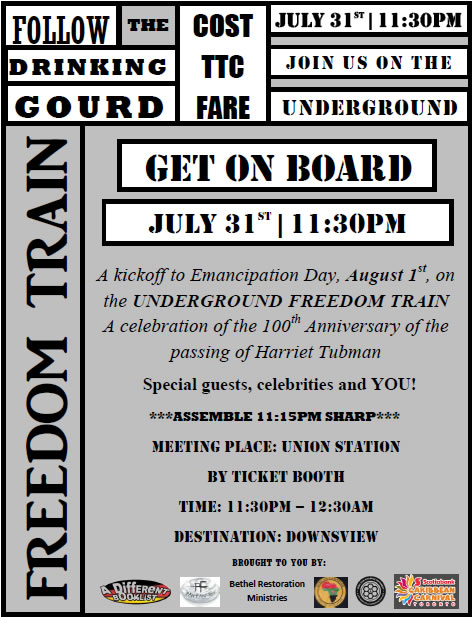 Join A Different Booklist, Councillor Josh Colle and our community partners on...

Journey with us on the underground from Union Station to Downsview Station as we usher in Emancipation Day! Get on board the FREEDOM TRAIN for a train ride with special performances, special guests and YOU!

Tuesday 30th July:
Wednesday 31st July: Thursday 1st August: FrIday 2nd August: So note the date and times your section will be distributed and ensure that you DO NOT show up BEFORE your pickup date.********IMPORTANT PICKUP INFO**********
at July 29, 2013 No comments:

Here is your costume pick up information as per Fantazia International's Facebook page(https://www.facebook.com/groups/fantazia09/)

You must have your receipt available to ensure final payment is made (Cash Only) and costume pickup is complete.
at July 29, 2013 No comments:

Here is your pick-up schedule as per the Tribal Carnival website:

FEMALE INDIVIDUAL OF THE YEAR:

MALE INDIVIDUAL OF THE YEAR:

JUNIOR QUEEN OF THE BAND:

JUNIOR KING OF THE BAND: 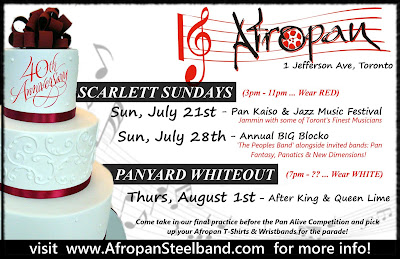 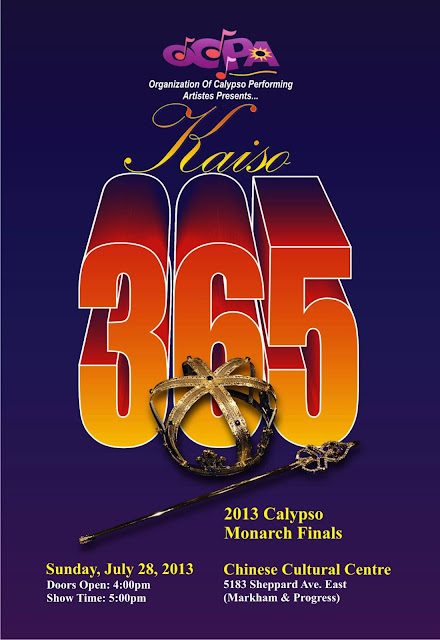 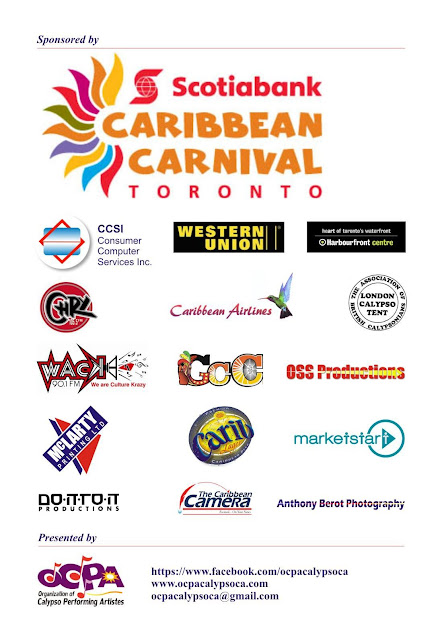 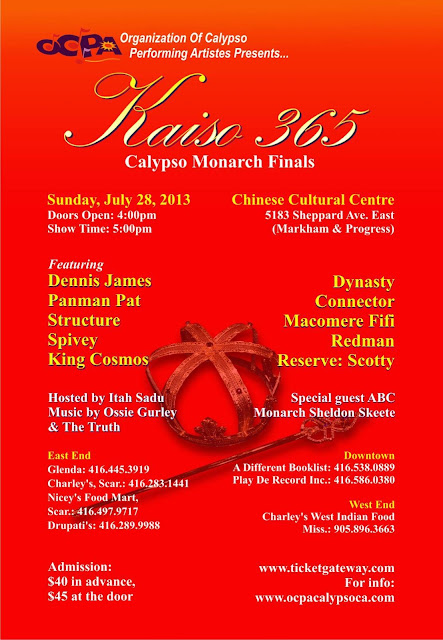 Good Luck to all the Finalists!!!!

All you mums, dads, grannies, grandads, aunties, uncles, godparents.....have you registered your kiddies for Junior Carnival yet?

Costumes are still available at some mas camps including Toronto Revellers which is located at 1001 Ellesmere Road at Kennedy Road (Phone number: 416-752-8349).

Please consult this handy dandy Band Directory for a list of all participating mas bands as well as their contact info: http://www.decocoapanyol.com/2013/06/2013-toronto-canival-band-directoryplay.html

Please also note the location for the Junior Carnival parade remains the same but the route has been changed and shortened! 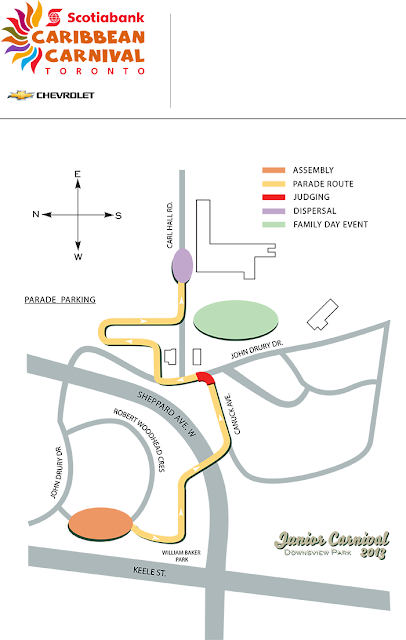 12. D'Regulars Arts and Cultural Club
Theme: MAMA THIS IS MAS

Its not just a launch, its a LIME!!!! Toronto Carnival Official Launch is tomorrow!

Its time to get ready!!!

The 2013 Toronto Carnival Official Launch takes place tomorrow....Tuesday, July 9, 2013. This year's kick-off promises to be more than just a lunch time event.  After the official launch from 12:00 p.m. - 2:00 p.m. the festivities will continue into the evening with a performance from Ravi B among others.  Check out the Press Release below......

MEDIA ALERT/PHOTO OP -
Scotiabank Toronto Caribbean Carnival Heats Up the City
Performers will kick-off the Scotiabank Toronto Caribbean Carnival at Nathan Phillips Square
JULY 8, 2013  (Toronto) The media are invited to join MPP, Minister Michael Coteau, Christine Williams, Scotiabank Vice-President Toronto East District, members of the Canadian Caribbean community and Trinidad recording star Ravi B to kick off the 46th annual Scotiabank Toronto Caribbean Carnival at 12:00 p.m. on Tuesday, July 9 at Nathan Phillips Square.
The launch ceremony, hosted by CTV Toronto’s Andria Case and CP24’s Gurdeep Ahluwalia will be followed by a colourful parade of Mas players, Bahamian Junkanoo performers, steel pan performers, calypso singers and local and international Soca performers. Caribbean food vendors and a beer tent will be available on the Square throughout the day and evening.
The Vibe Party, will take place later that day at Nathan Phillips Square, from 2:00-8:00 p.m. as part of a free outdoor show and will again feature Ravi B, the steel pan orchestra Salmon Cupid and Company, Calypso singers Macomere Fifi, Susan G, and Connector along with Canadian recording artist Mon-t-hama.
Scotiabank Toronto Caribbean Carnival events this summer include:
About Scotiabank Toronto Caribbean Carnival
The Scotiabank Toronto Caribbean Carnival is an exciting three-week cultural explosion of Caribbean music, cuisine, and revelry as well as visual and performing arts. Now in its 46th year, it has become a major international event and the largest cultural festival of its kind in North America. As Carnival is an international cultural phenomenon, the great metropolis of Toronto and its environs will come alive as the city explodes with the pulsating rhythms and melodies of Calypso, Soca, Reggae, Chutney, Steel Pan and Brass Bands. The Festival Management Committee oversees the running of North America's largest outdoor festival.
Corporate sponsors of this year's festival include: Scotiabank, Chevrolet, The Toronto Star, CTV, CP-24, FLOW fm, The Canadian Federal Government, The Province of Ontario, City of Toronto, Tourism Toronto, The Greater Toronto Airports Authority, The Ontario Science Centre, Toronto Public Library, Eglinton Square Mall, and the Liberty Grand.
About Scotiabank
Scotiabank is committed to supporting the communities in which we live and work, both in Canada and abroad, through our global philanthropic program, Scotiabank Bright Future.  Recognized as a leader internationally and among Canadian corporations for our charitable donations and philanthropic activities, Scotiabank has provided on average approximately $47 million annually to community causes around the world over each of the last five years.
Visit us at www.scotiabank.com.
For more information about the programmes and events, please visit the festival's official website at www.torontocaribbeancarnival.com. The Festival Office is located at 19 Waterman Avenue. Contact info: Tel: 416-391-5608; Email: info@torontocaribbeancarnival.com.
For media inquires:
Stephen Weir
Scotiabank Toronto Caribbean Carnival Publicist
Phone 416-489-5868
Cell: 416-801-3101
Email:  Stephen@stephenweir.com
at July 08, 2013 No comments: