Ok....mini break is over......
Big band launches and registration for T&T Carnival 2K11 are in full swing. Tribe is already sold out (no real surprise there) but there are still plenty of other bands to check out.
Here is listing of bands that have launched and that have updated their websites with costume galleries:
Skullduggery - http://www.skullduggerymas.com
Tribe - http://www.carnivaltribe.com
Bliss - http://www.blisscarnival.com
Y.U.M.A. - http://www.yumavibe.com
Harts - http://www.hartscarnival.com
Island People - http://www.islandpeoplemas.com
Spice - http://spicecarnivalband.com
Just Friends - http://www.justfriendstt.com
DreamTeam, Showtime, and Ronnie and Caro have also launched but their websites haven't been updated yet.
at August 29, 2010 No comments:

WE TING - A Celebration of T&T Independence 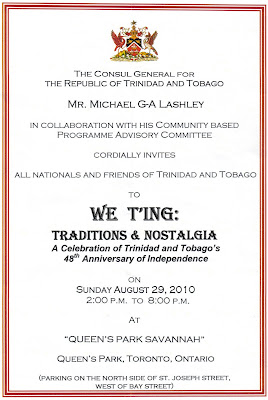 We would like to thank YOU the supporters of the Toronto Revellers... the Peoples Band as we celebrate a successful 2010 Caribana Season!

Come on out one last time, 'Cause There Ain't No Stopping Us Now!

Here's the pose...what do you think?

Playing mas in Toronto is a pretty sweet deal!!! We are very lucky.......playing mas here not only affords you the joy of CARIBANA but you also get to play mas for HAMILTON CARNIVAL and BARRIE CARIBFEST. And if you're a Carnival Nationz masquerader like myself then you can use your costume at Miami Carnival too.
Where else in the world could you use your costume up to FOUR times......seems like a pretty sweet deal to me!!!
So that being said Hamilton Carnival is this weekend so fluff those feathers and bring out the glitter.....we PALANCIN' again. (Note: Barrie's Caribfest is next weekend)
But wait maybe your band is actually taking part in Brampton's West-Fete.....that's this weekend too!!
But then again maybe you're going way way out west to Alberta. The folks out in Edmonton will also be parading for CARIWEST.
Wherever you are.......enjoy the festivities and soak up the culture.
Festival websites:
Hamilton MardiGras Carnival - http://www.hamiltoncarnival.com
Barrie Caribfest - http://www.caribfest.ca
Brampton West Fete Carnival - http://www.westfetecarnival.com
Edmonton Cariwest - http://www.cariwestfestival.com
at August 05, 2010 No comments:

Toronto, ON (August 3, 2010) – On Saturday, CP24’s exclusive live coverage of the SCOTIABANK CARIBANA 2010 PARADE rivalled the estimated number of parade spectators, attracting an astonishing 1.123 million viewers to the coverage of the parade, close to a 200% increase over its 2009 viewership. Live parade coverage began at 2 p.m. with 503,000 viewers watching all or some part of the parade live on CP24.CP24 is in the second year of a three-year exclusive broadcast media partnership with Scotiabank Caribana.

“CP24 is proud to serve as the ‘eyes and ears’ of Toronto, and our coverage of Scotiabank Caribana 2010 is reflective of the cultural richness of our great city,” said Bob McLaughlin, Vice President and General Manager, CP24. “No matter what is happening in Toronto, CP24 is always with viewers, and we are delighted that the viewers are also with us.”

About Scotiabank Caribana
The Scotiabank Caribana Festival is an exciting two-week cultural explosion of Caribbean music, cuisine, revelry as well as visual and performing arts. Now in its 42nd year, it has become a major international event and the largest cultural festival of its kind in North America. As Caribana is an international cultural phenomenon, the great metropolis of Toronto and its environs will come alive as the city explodes with the pulsating rhythms and melodies of Calypso, Soca, Reggae, Chutney and Steel Pan music. The Festival Management Committee oversees the running of North America’s largest outdoor festival.

About CP24
CP24 is Toronto’s source for breaking news. Following the mantra “we’re always with you,” viewers can watch CP24 on television, listen on the radio, and follow along online at CP24.com. The station is owned by CTV Inc, a division of CTVglobemedia.

The all-time most winning band Saldenah Mas-K Club added yet another 'Band of the Year' title, making the tally 16 for the record holder.

CARIBANA 2010 BAND OF THE YEAR RESULTS:

Much of the 13 competing steel bands played the popular song "Battle Zone' as their song of choice, but in the end Salah's Steel Academy's rendition of the song (arranged by Salah Wilson) earned the top score.

The unofficial results from last nights competition at Lamport Stadium are below.