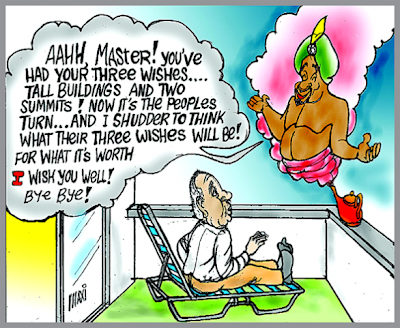 The second annual Trinidad and Tobago Independence Day celebrations, hosted under the aegis of the distinguished Consul General of Trinidad and Tobago, Mr. Michael Lashley, will take place on Sunday August 30th, 2009 at Queen’s Park, Toronto commencing at 2:00 p.m.


The celebrations will commence with an interfaith service and will include performances that will showcase the unique culture of Trinidad and Tobago representing the diversity of its population. The performances will include calypso, drumming, tassa, dances, steelpan and traditional mas and will feature artistes and groups such as: Anslem Douglas, Macomere Fifi, Afropan, Kalabash, PanFantasy, Caribbean Folk Performers, the Muhtadi Drummers, Annemarie Woods and much more.


There will also be lots of prizes for the winners of games, including “the best dressed red, white and black” individual who epitomises the spirit of Trinidad and Tobago. For further information please direct your inquires to congen@ttconsulatetoronto.com

Email ThisBlogThis!Share to TwitterShare to FacebookShare to Pinterest
Labels: Caribana 2009, King and Queen

What wonderful news from the soca world!!
Check out the article in today's T&T Express........

Soca star Destra Garcia is pregnant and expecting to deliver her
baby sometime in January 2010.

It will be the first child for her and the second for her boyfriend/manager/producer of the past nine years, Brian Morris. He is the father of a 13-year-old daughter who lives in Atlanta, Georgia, USA.

Garcia, known for hits like "Tremble It", "Sassiness", "Bonnie and Clyde",
"I Dare You", "Obsessive Winers" and "Carnival", told the Express she had some "mixed emotions at first".

"I've always had a bit of an irregular cycle, so I was not sure it was that, but my gynaecologist recently confirmed for me that yes, I am very pregnant. I hope my fans are very happy for me."

The soca star, who is the face of Digicel in Trinidad and Tobago, said the news took her by surprise because there had been no morning sickness. Her stomach has only "just" started to show, she said. Contacted for a comment, Sponsorship and PR manager for Digicel Marita Laurent extended congratulations to Garcia and Morris on the pregnancy.

"We fully support her as she embarks on the wonderful
journey of motherhood."

Garcia said she did notice she had gone up two bra cup sizes, an increase that was remarked upon by some fans who saw her at the recent Tribe launch at Pier 1, Chaguaramas.

But she sees it as the "hand of God" intervening in her plans, as "we both said we would do this some day".

Showering praises on Morris, who is also the band's sound engineer, she
said, "Marriage and kids is something we always planned to do, but each year
we've said 'next year'. Brian is very quiet, he always stays in the background,
but he is a wonderful person and he is going to be a great father."

Morris described himself as "excited" and sees their marriage plans as coming forward in the "not too distant future".

Asked who she will be getting her pregnancy tips from, Garcia said she expects a lot of support from her mom and her sisters in soca, Denyse Belfon and Alison Hinds.

Now she agrees the pace will have to be slower, but not before she fulfills her commitment to Miami Carnival in October. A lot of it will depend on her doctor's orders, but she is already working on material for Carnival 2010.

Also look out for her tomorrow evening at the Digicel "Outta Control" free concert at Adam Smith Square, Woodbrook. But how much less she takes on in the immediate future is not only her decision but Morris's and their business partner, Robert Nurse.

"We have to do what is best for the band, because the guys support me 100 per cent, " she said.

Early bird Special
Register for 15 sessions at any location by August 28th
Save $5.00! 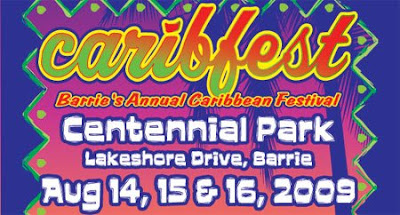 Hi readers,
Barrie's Caribfest takes place this coming weekend so if you're in the mood for another jump up then this is the place to be. A lot of the Toronto mas bands take part in this parade so its another opportunity to use your costume. Check with the mascamps to see who will be attending. Hopefully you didn't jump and wine too hard at Caribana and your costume is still intact :-p
at August 10, 2009 3 comments:

2009 NORTH AMERICAN FALL TOUR DATES ANNOUNCED
Maxwell will return to the road in late September for a series of select North American concert dates, his first since wrapping a sold-out summer tour in early August. Maxwell's highly anticipated autumn tour kicks off at the Air Canada Centre in Toronto on September 25th. Go to MUSZE.com for a full tour date listing.

What is JerkFest?
JerkFest is an annual festival which takes place around the second weekend in August every year. JerkFest celebrates the world renown jerk cuisine. Its a fusion of jerk food, pulsating music, family friendly entertainment and good vibes - all under the throbbing Toronto sun.

Visit the website for more info: http://www.jerkfestival.ca
at August 05, 2009 No comments:

One of the bands featured on the Cariwest website is called Sykotik Mas. This band is actually based in Calgary but they will be making the trip to Edmonton for Cariwest. They have their own website which features their 2009 presentation "FORBIDDEN TINGZ" comprised of 3 sections: SPICY GOLD, EARTHLY PLEASURE and BLUE PASSION.
Check out their website or facebook page and maybe if you're taking a trip out west you can contact them to play mas: http://www.sykotikmas.com
Facebook: http://www.facebook.com/home.php?#/group.php?gid=53588525825&ref=ts
The Cariwest website also lists 3 other mas bands taking part in the Parade this Saturday:
"Osmond Edwards & Associates" - Theme: From Heaven to Hell Contact for Costumes: Osmond Edwards @ 780 461-1949 or 780 934 5450à

This weekend Cariwest will be celebrating its 25th anniversary. Big up to all the West Indians out in Edmonton. I hope you guys have beautiful weather for the festivities!!

Here's some info about Cariwest taken from their website:

Cariwest brings the spirit of Caribbean Carnival to the Festival City of Edmonton, Alberta. The festival is 3 days of fun filled activities! Along with our Colourful Costume Extravaganza, you will also enjoy the sweet sounds of a steel pan, savour the flavour of West Indian Cuisine, and 'jump up' in the streets of Edmonton as you dance alongside the Mas band parade, with Calypso music resonating through your soul! Click here for our schedule of events.

Visit our Caribbean Village, located in Sir Winston Churchill Square for food, drinks, hanging out with friends while enjoying the fabulous entertainment we have planned for you and your families.

This year (2009) Cariwest celebrates its 25th Anniversary. Come celebrate with us! Do you want to play mas with us?

Taste of the Danforth

The Taste of the Danforth begins this Friday so go get your Greek on!!

Check out the link for more info: http://www.dine.to/tasteofthedanforth.php
at August 05, 2009 No comments:

Email ThisBlogThis!Share to TwitterShare to FacebookShare to Pinterest
Labels: Secrets of a Black Boy, Taste of the Danforth

Congratulations to Carnival Nationz!!! The band looked absolutely BEAUTIFUL on the road and I had an amazing time. Big up to all the LYCHEE CREW and to Ayanna (the SOCACIZE Queen) for creating such a great routine to start the show. A special shout out to fellow blogger THE SWEET 7......it was such a pleasure to meet you on the road!!! I can't wait for next year......

Judging Criteria:
Each band must portray a theme suitable of the Carnival masquerade tradition, and a panel of volunteer judges will adjudicate each band based on the following criteria: Visual Impact (max. 20 marks); Authenticity (10); Creativity (20); Mas on the Move (10); Clarity of Theme (10); Presentation (20); and Craftsmanship (10) for a total of 100 marks. The order of merit is determined by discarding the highest and lowest score per participant. The judges’ decision is final, and is announced at the end of the parade.

NOTES:
Traditionally, there are 16 competing mas band spots per year that are hotly contested. They are been divided into three (3) categories:

Composed of two new, or returning mas bands (after said returning band sits out one year of competition). Any of these bands can advance from Category “C” to Category “A” in one year.

Congrats to Salah Steel Academy.....traveling all the way from Montreal to claim the three-peat!!! You guys sounded excellent on Friday.

The unofficial results are as follows:

Judging Criteria:
A panel of volunteer judges awards points based on the following criteria:

2009 Scotiabank Caribana ™ King of the Bands 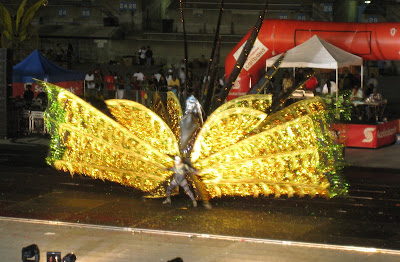 
2009 Scotiabank Caribana ™ Queen of the Bands 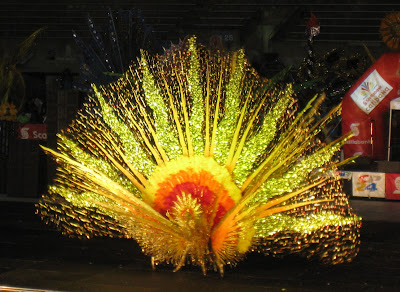 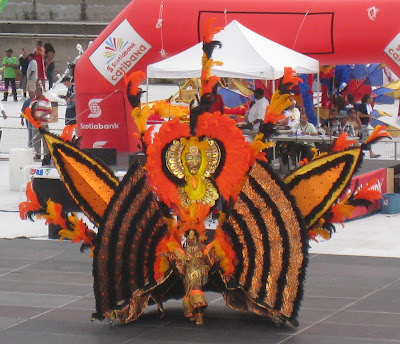 Judging Criteria:
A panel of volunteer judges awards points based on the following criteria: Visual Impact (max. 30 marks); Authenticity (10); Creativity (20); Clarity of Theme (10); Presentation (20); and Craftsmanship (10) for a total of 100 marks. The order of merit is determined by discarding the highest and lowest score per participant. The judges’ decision is final, and all results are announced at the end of the show.