Soca Baby for and Fay-Ann and Bunji 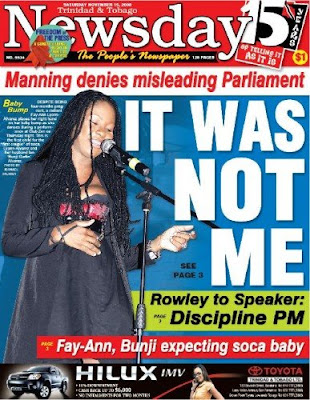 THERE is a soca baby on the way and due to arrive shortly after Carnival 2009.

Reigning Road March champion Fay-Ann Lyons-Alvarez is four-months pregnant and her baby is due sometime next April.

The “baby bulge” was first noticed on Thursday night when Fay-Ann performed at a media appreciation function at the Zen Night Club, hosted by the Unit Trust Corporation of Trinidad and Tobago.

A proud Bunji told Newsday that Fay-Ann was having such a very good pregnancy that they intend to fulfill performing commitments for Carnival 2009. He added, however, that as she would be almost seven-months pregnant in February, she would only perform if she “felt comfortable” doing so.

Yesterday the couple left for New York to perform at a College function.

The couple has already released two tracks for Carnival 2009, Bunji’s “Banana” and Fay-Ann’s “Heavy T”, both on the Buss Top Rhythm, produced by Bunji and Darrel Braxton.

They intend to release their full Carnival album by year-end and according to Bunji, they are looking forward to the season. Fay-Ann’s father, Road March and Soca Monarch legend Superblue (Austin Lyons) is said to be very happy about the impending arrival of his grandchild. The couple wanted to start their family this month, but it happened earlier than planned. They got married on December 23, 2006.