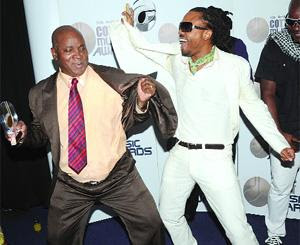 WINER BOYS: The Mighty Sparrow and Machel Montano dance backstage after receiving their respective awards for International Achievement and Songwriter of the Year at the 2008 COTT Music Awards at Queen's Hall, St Ann's, on Thursday evening. -Photo: JERMAINE CRUICKSHANK

The tenth edition of the Copyright Organization of Trinidad and Tobago (COTT) Awards was held this past Thursday and the winners are:

R&B/Hip-Hop of the Year - "What I Want" - Rohan "Fireball" Richards and Richard "Charsu" Ahong.

Chutney Soca of the Year - "Bring It" - Lalchan "Hunter" Babwah.

Reggae/Dancehall of the Year - "Who Do You Want" - Troydon "Blazer" Cruickshank and Ray Roopnarine.

The night's big surprise was a special performance by British reggae artiste Maxi Priest, who performed alongside Shurwayne Winchester and his new band YOU. Also performing were Destra, Baron, Jadee, Mungal Patasar who opened the show and Nadia Batson.

In his feature address, COTT president Lutalo "Brother Resistance" Masimba said the COTT Awards gala had outgrown Queen's Hall and must now search for a new venue that could accommodate its entire membership.

At the awards, Montano hinted at a name change for his HD band, which may soon be known as the Caribbean Planet. It was also revealed that Fireball's "What I Want" is currently the number one most downloaded song in the world.

Click here for the entire article in the T&T Express.