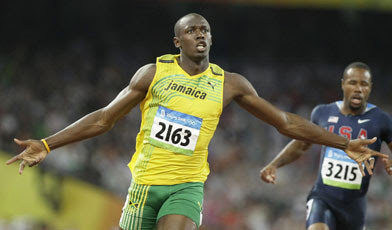 Usain Bolt of Jamaica reacts after winning the gold in the 100m Saturday in Beijing. (Anja Niedringhaus/Associated Press)

Jamaica's Usain Bolt ran an electrifying 9.69 seconds in the 100-metre sprint to set a new world record and take Olympic gold at Bird's Nest Stadium in Beijing on Saturday night.

Richard Thompson of Trinidad and Tobago won silver at 9.89, with Walter Dix of the United States taking bronze. Dix, an NCAA champion just out of school at Florida State, ran 9.91.