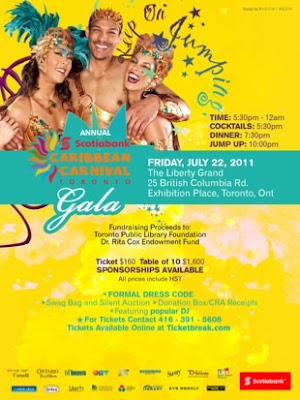 (Toronto) – In partnership with the Toronto Public Library Foundation, STCC presents an evening to celebrate the Culture of Carnival, recognize 5 key contributors and to raise funds for the Dr. Rita Cox Endowment Fund. The Rita Cox Endowment Fund for Black and Caribbean Heritage supports The Rita Cox Black and Caribbean Heritage Collection at the Toronto Public Library. The Collection features more than 16,000 print and audiovisual materials for adults, children and teens about the black and Caribbean experience with special emphasis on Canadian material. The collection is available at convenient library locations across the city: Parkdale, Yorkwoods, Malvern and Maria A. Shchuka branches.

This year 4 STCC Tribute Awards will be presented to Glenda Bostic for her dedication and commitment to furthering calypso through the Organization of Calypso Performing Artistes, John Kam – a veteran involved in production of the festival for over 25 years, Pat “Panman” McNeilly – a dynamic contributor to both calypso and steelband in Canada and the late Elton “Smokey” John who will remembered by all from inception of the festival in 1967 to the formation of the Toronto Symphony Steel Orchestra and the making of pans in Toronto. The Kathy Searles Volunteer award will be presented to Frances Lochan, Event Manager of the King & Queen event which takes at Lamport Stadium each year.

Host for this year’s gala dinner program is Itah Sadu – owner of A Different Booklist. Itah is an author and storyteller who shares the rich oral traditions of the Caribbean, Africa and Canada with her audiences and is well known to Toronto Public Library and the Dr. Rita Cox Endowment Fund. Entertainment include the reigning Calypso Monarch “Macomere FiFi”, D Juiceman, Hummingbird Tassa Group, Pan Fantasy Steel band. The jum-up starts at 9:30 pm featuring DJ Desmond Peters from Wack Radio in T&T and a live band “The Vibes”.

On Friday, July 22nd, the Liberty Grand Complex (Toronto’s CNE grounds) will be transformed into an island of sensational colour, rhythmic vibrations and exotic extravagance. It will be dinner for over 500 guests featuring the melodious sounds and culinary splendor of the Carnival through music, costumes, magnificent dinner program and fundraising activities such as silent auction, swag bags and CRA approved donations box.

Tickets are now available and can be purchased at the Festival Management Committee’s downtown offices 263 Davenport Avenue. Lower Level) or on-line at http://www.torontocaribbeancarnival.com . Doors open at 5.30 pm for cocktails and the sit-down dinner begins at 7.30 pm. Tickets - $160 / Table -$1,600.

Produced by the Festival Management Committee, Scotiabank Toronto Caribbean Carnival Festival is an exciting three-week cultural explosion of Caribbean music, cuisine, revelry as well as visual and performing arts. A major international event and the largest cultural festival of its kind in North America – Scotiabank Toronto Caribbean Carnival is an international cultural phenomenon, the great metropolis of Toronto and its environs will come alive as the city explodes with the pulsating rhythms and melodies of Calypso, Soca, Reggae, Chutney, Steel Pan and Brass Bands.

MEDIA: You are welcome to cover BUT you are not guaranteed a meal. PLEASE confirm with Stephen Weir. 416-489-5868 . Ontario Minister Best and Federal Minister Kent will be speaking at the Gala.