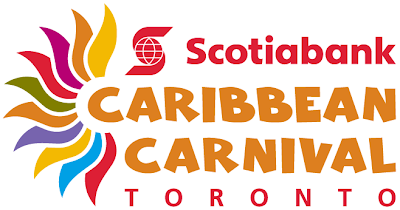 For more information on Canadian citizenship ceremonies held across the country, please visit the Celebrate Citizenship section of Citizenship and Immigration Canada’s website at www.cic.gc.ca.

The Scotiabank Caribbean Carnival is an exciting three-week cultural explosion of Caribbean music, cuisine and arts. Now in its 44th year, it has become a major international event and the largest cultural festival of its kind in North America. For more information, please visit the festival’s website at www.torontocaribbeancarnival.com.

As part of Toronto Pearson’s renewed focus on guest experience, media are invited to jump start the Scotiabank Toronto Caribbean Carnival weekend while the airport surprises and delights guests arriving into Terminal 3 with Toronto chef Roger Mooking, and the world renowned Bahamian Junkanoo Legends from the Bahamas on hand to entertain Scotiabank Toronto Caribbean Carnival guests as they arrive in Toronto.

1. Performance by world renowned Bahamian Junkanoo Legends from the Bahamas that starts at departures and will make its way to arrivals in Terminal 3. Band member John Zonicle will be onsite and available for interviews.

2. Sampling of Caribbean fare, including salt cod fritters prepared by one of Canada’s premier chefs, Roger Mooking, available for interviews by appointment after the demonstration

WHERE: Toronto Pearson, Terminal 3, International Arrivals. For drivers, park in the Terminal 3 garage and you will be given a parking voucher at the event. Directions to Terminal 3 parking can be found here: http://www.torontopearson.com/en/toandfrom/directions/

Roger Mooking has earned a reputation as one of Canada’s premier Chefs by developing a culinary philosophy built on perfect execution of globally inspired culinary traditions. As a third generation restaurateur and chef he began his formal training through the George Brown Culinary Management Program where he earned Top Student Honors diploma and is now the Chair of the Professional Advisory Committee.

Roger continued his training at Epic Dining Room in Toronto’s world renowned Royal York Hotel before co owning and consulting on many food and beverage operations.

He is the Host and Co-Creator of his own internationally broadcast television series Everyday Exotic. He is also the Co-host of the upcoming series Heat Seekers airing on Food Network Canada.

In addition he is the recording artist and creator of Soul Food; a unique food and music project released by Warner Music. For Roger, music and the epicurean world are seamless. One feeds the body, the other the soul; it is all food in all its various forms.

The Bahamian Junkanoo Legends: born from a group of Bahamians missing Junkanoo music - the sweet sound of their home. This group simply wanted to share the most recognizable culture and distinct music from the country of their birth to their new home. After a 20 year absence from the Festival's parade, the Association of Bahamians in Canada have resurrected the core group with a contingency of 50 "Legends" flying up from the Bahamas.

The Scotiabank Toronto Caribbean Carnival is an exciting three-week cultural explosion of Caribbean music, cuisine, revelry as well as visual and performing arts. Now in its 44th year, it has become a major international event and the largest cultural festival of its kind in North America. As Carnival is an international cultural phenomenon, the great metropolis of Toronto and its environs will come alive as the city explodes with the pulsating rhythms and melodies of Calypso, Soca, Reggae, Chutney, Steel Pan and Brass Bands. The Festival Management Committee oversees the running of North America’s largest outdoor festival.

The GTAA is the operator of Toronto Pearson International Airport, Canada's biggest airport and one of the largest airports in North America in terms of passenger and air cargo traffic. In 2010, Toronto Pearson handled an estimated 31.9 million passengers and is ranked 4th largest in international passenger traffic in North America. The focus of the GTAA continues to be on competitiveness, growing the airport's status as an international gateway, meeting the needs of our guests and ensuring the long-term success of the organization, our airline customers and the regional economy. 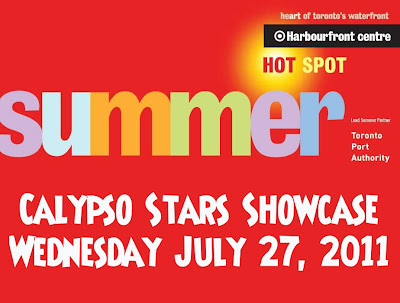 An entertainment-packed two and a half hour showcase featuring eight of the most wildly popular and original calypso songs of the 2011 Calypso Tents Music Series (CTMS), presented by the Organization of Calypso Performing Artistes.

Map to this event
Public Transit:
509 Streetcar or a 10 minute walk from Union Station.
TTC Trip Planner
at July 27, 2011 No comments:

Your Tribal Knights™ Costume Pickup schedule is as follows;

* Please arrive 20 minutes early for any special fitting or upgraded costume details.
Please note: Tribal Knights™ Mas Center will be closed at 10pm on Friday July 29, 2011 and any costumes not picked up prior will be re-sold .

Any customers who reside outside of Ontario you will have until Friday July 29th 2011 from 10am - 8pm to pick up your costume only as an alternative to original Tribal Knights™ Costume Pickup schedule.

If you have any questions in the meantime, please feel free to contact your Tribal Knights™ 2011 representative at 1+(416) 396-3780 or visit our websites Facebook.com/TheTribalKnights and www.tribalknights.com.

Thank you for your kind co-operation, Mas is not an event, it's a way of life.

Hi Readers and all Steelpan lovers,
I stumbled upon this today.....the Canadian Federation of Steelpan, a brand new not-for-profit organization whose mission is "to promote education, collaboration, communication, and awareness around the art form called "Steelpan".
The organization's official launch actually takes place tomorrow night. Here are the details:

Welcome to the Canadian Federation of Steelpan We are delighted to announce the Official Launch of Canada's first national organization dedicated to promoting the understanding and appreciation of the musical art form called Steelpan. Come enjoy a wonderful sampling of Steelpan music along with complimentary cocktails and a delectable array of hors d'oevres and international treats. Event: Canadian Federation of Steel Pan - Official Launch at Toronto Board of Trade Date: July 27th, 2011 Where: First Canadian Place, Toronto ON M5X 1C1 Tel: 416.366.6811 MAP Address: 77 Adelaide Street West, Toronto, ON M5X 1C1 (just west of Bay Street) When: 6:30 pm - 9:00 pm Please note that this event is by invitation only. Invited guests are asked to confirm your attendance by contacting: Veronica Tyrrell at 905.257.0581 or Ken Bhagan 416.515.7884 Email: info@CanadianFederationofSteelpan.org

Hi Readers,
Check out this deal for a professional photo shot in your costume........very cool idea!!! 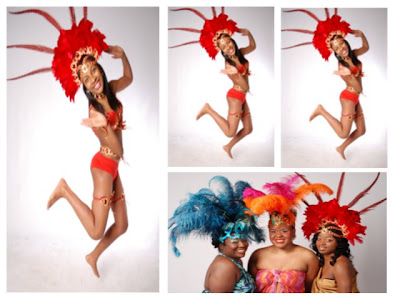 Before you Jump up in de mas, Get Ready for the Flash!
Grab your Carnival Expressions Mas Portrait Session Today! Here is your chance to capture the beauty of Masquerade in a private photo session with Photo Arista Photographer Jamie Raddatz!
You work hard to get ready for Mas Every year and you deserve great Portraits to display in your home and give to your family and friends. These professional portraits will be printed immediately after your session. You will also receive FREE DIGITAL PRINTS by email.
Just choose one of our affordable packages, Grab your costumes, make up and stilettos ....and work it for the camera! 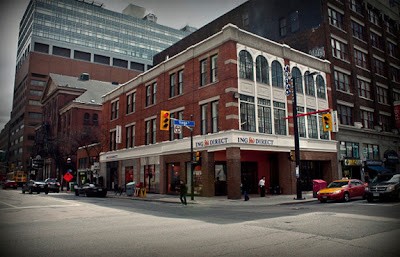 BEST COMPOSITION ON A LOCAL TOPIC:

take home a cash prize of over $6,000.00 and will be sent to represent Canada in London,

U.K in next year’s Notting Hill Carnival, as part of an exchange programme with the Association

perform here as a Special Guest.

If you're not going to Pan Alive on Friday, maybe you would like to check out this event taking place at Harbourfront.....

Jouvay is an ole mas spectacle where the traditional Trinidad and Tobago carnival characters come alive to the rhythms of drums and steel pan worn around their necks. Join Theatre Archipelago, directed by Rhoma Spencer, Tobago Speech Band characters (Keisha Jack and Dr. Verleen Bobb-Lewis), a pack of blue devils, a Midnight Robber, a Tobago Speech Band, Paper Doll, and an interactive mud band as they roam the Ole Yard of Harbourfront Centre, parading the grounds accompanied by steel pan. Starting from the Redpath Stage, mask-wearing characters will display ole mas placards, stopping to re-enact them as they move along, playing their portrayals to spectators with satirical parody, some spoken word, dance and buffoonery.

Check out the website for the full event listings:

Pickup is located at the Mas Camp 519 McNicoll Ave.
NEW For ladies there will be LIMITED tights on sale at the Mas Camp during pickup times. These are the tights from Trinidad that are skin tone aaaaaand eliminate the forbidden cellulite look. They are great in hot conditions so don't worry about that. If you're interested ask at pick up time.
NEW FAST TRACK For those who have paid off their costume already please note there will be a special location for you. You will not have to wait to pick up your costume. Please remember to walk with your receipt and/or ID and this process will be painless. Your bag will be ready and waiting for you on your assigned day.
Ladies and Gentlemen the time is here for 2011. Time to get ready for de road. We at Carnival Nationz are just as excited as you are to be presenting Mythical Creatures on the Lakeshore. I know you're all ready for yuh costumes like yesterday so LET'S GET IT ON!
We have set aside special days for each section. Pickup begins on Tue July 26th and ends on Fri Jul 29th. For all out of town masqueraders please make sure we know to hold your costume until Friday evening or a specified time. Please NOTE: At pickup you will recieve all other information pertaining to Caribana day assembly time, location, order of trucks etc. The scheduled time for costume pickup is as follows:
PICKUP RULES AND GUIDLEINES:
We look forward to meeting you in person once again and jumping with you on de Lake Shore!!!
at July 24, 2011 No comments: 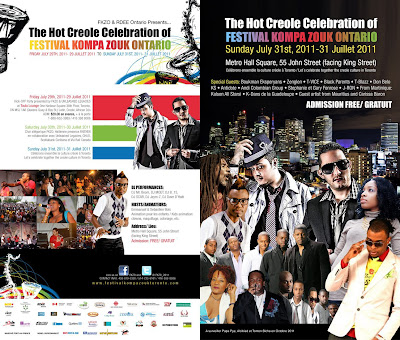 · If you are sending a designate, a signed letter with a copy of your (costumed participant) government issued ID naming the person to release the costume to should be given to the Toronto Revellers at time of pick up

· ALL confirmed registrations WILL BE issued a Toronto Revellers Wristband. **NEW Wristband along with Costume MUST be worn on PARADE Day.

· Those without wristbands will not be allowed to enter the band (even if you have a costume). Extra precautions are being made to secure our participants and performers. · On the day of pick up you will receive a detailed information sheet. Our position for the Toronto Caribbean Carnival is #6

Respect the Mas' - We want our masqueraders to enjoy themselves, they have paid hard earned dollars to participate with the Toronto Revellers as we Present Welcome to OZ. We kindly ask that friends and family, respect the masqueraders in the band and chip down the Lakeshore with us, OUTSIDE of the band.

Thank you again for your participation, see you in 2012.

It's All about the Experience