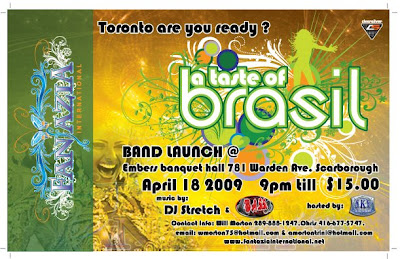 Everybody that I've spoken to so far has already said that this is a band to watch out for this year.

Apparently the bandleader is a designer extraordinaire who's won best sections with every band he's ever worked with. ( Saldenah, Carnival Naytionz and Toronto Revellers.

A much anticipated launch for 2009 to say the least.

Wow....this is exciting. Can't wait to see what this band has to offer!!!

FANTAZIA INTERNATIONAL is apparently 1 of 2 new bands for Toronto Caribana 2K9. www.FantaziaInternational.net - is by Will Morton - who's been designing costumes for more than a decade for the winners- Saldenah, Carnival Nationz and more recently Toronto Revellers.

It's what I would call "Engineered Co-incidence" that these bands have won during the years he's been with them.

Will and his wife (Lisa) had a few sections last year with Toronto Revellers that were outstanding; remember those safari/zebra/zulu influenced costumes?

What may work against Fantazia International this year though, is their (unconfirmed) position in the parade.

Speaking of new bands for Caribana 2009, Curtis Eustace (formerly of Carnival Nationz) is also bringing a new band 'All Spice Carnival' for this year too.

The normal position for new Caribana band(s) in their first year, is the last spot(s) in the parade. So in this case Fantazia and All Spice will liklely be occupying the #15th & 16th spots.

Has anyone heard anything about the parade route being changed somewhat - Is this true?

OK so the anticipation is over, went to see FANTAZIA INTERNATIONAL band launching last night and....

Well, honestly, the costumes were quite impressive. They representated 'a taste of brasil' quite well. Mr. Will Morton (band leader) being first out of the gate with Fantazia International had everyone with the look of great expectations on their face as they entered the hall at Embers'. Too bad we may not get to see the band on the Lakeshore for Caribana Saturday - as a new band, he's defacto position is #15 (essentially last in appearance of bands).

Having those terrific Brasilan dancers on-stage before and after the parade of costumes only enhanced the night.

And that final 'one of a kind' costume with the wire framed bra kinda summed up what my 'Brasilian' expectations were is the first place.

I love the elaborate back-pack pieces that seemed to be so unique to each section yet common throughout the evening.

What appeared to be folk drummers and other band members were mulling about earlier in the evening, but they did not perform, at least not while the majority of the attendees were present.

Knowing the way band launches go, I am almost certainly there's probably more to see from Fantazia International and Mr. Will Morton.

For starters, my question would be, where are (were) the male costumes?. The two male protrayals were lost in the Brasilian sea of colors.

It was also very humbling to see other renowned band leaders and mas band members present. Were they simply lending their support or bitten by the curiousity bug too?

Lets wait to visit the Fantazia mas camp when it opens.

Thanks for the great review CB!! Unfortunately, I was unable to attend so its nice to hear some feedback from the event. Looking forward to visiting the mas camp. I guess best bets at seeing this new band in all its glory will be at the judges' point....take note folks!