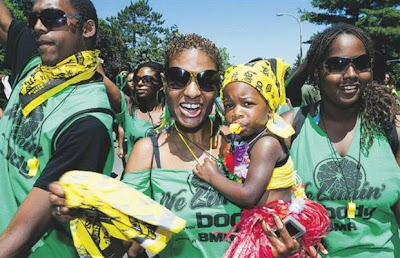 On the most perfect summer day a festival organizer could ask for, th

ousands of Ottawans descended on Petrie Island in tube tops and beach shorts for a Caribbean beach party featuring spicy food and even spicier tunes.

Without a single cloud in the sky the temperature hit a high of 25C, but the steady breeze blowing anywhere from 10 to 20 kilometres per hour all day allowed people to get their groove on at Carivibe 2011 without breaking too much of a sweat.

And that came in handy for some of the afternoon's entertainment, especially the Carivibe Booty Camp Showcase, featuring booty shaker Dionne Sinclair and a host of other dancers.

People played beach volleyball, sipped on lemonade, danced on picnic tables in the beer section after a visit to Da Rum Shack and listened to DJs and steel drum bands through a massive PA system.

Patricia Joyce, 40, was out enjoying the day with her husband Jim McKee and fiveyear-old daughters Sarah and Sophie McKee. Joyce said the family was having fun, but she was surprised that it took so long to move through the gate -about 15 minutes -and that there was very little being offered for free after the $20 cover charge (the children got in free).

"For us it's OK, but it could be a very expensive day for a family," Joyce said. "It's a lot of fun and it's a great event, but maybe in the next year and the year after, they'll look for ways to organize it a little more tightly and maybe make it a better value for families."

Little Sarah, meanwhile, was all smiles.

"Yeah," she said when asked if she was having fun. "Because I like bouncing."

Sophie liked her rice and was excited for cotton candy.

Entry to Carivibe jumped from $10 last year to $20 because of increased costs across the board -such as security and entertainment -and because the festival got bigger, said organizer Trevor Mason. And he said the lines were long because security made sure to check bags for alcohol and other things.

"When you're dealing with that amount of people, it's all about security," Mason said. "We could easily let everybody in without checking them, but we want everyone to be secure and safe. You never know, anything could happen. It has to be safe, and I hope people understand that."

The festival has been running for 10 years, but it's only the second year at Petrie Island with the parade.