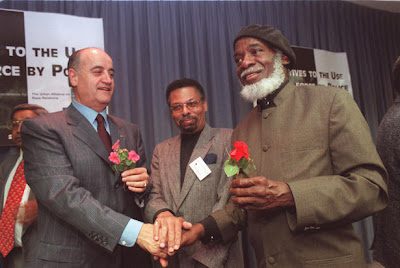 Dudley Laws was a controversial race activist, beloved by many in the community that he served.

A constant flow of well-wishers visited him in his hospital room where he’d been confined for the last month and a thousand supporters turned out for a ceremony to honour his activism just days before his death.

In 1988, after a number of black men were shot and killed in confrontations with Toronto-area police, Laws co-founded the Black Action Defence Committee along with Charles Roach, Sherona Hall and Lennox Farrell.

The group pushed for independent police oversight, and Laws became a tough and vocal critic of the force’s relationship with his community. And he accused police of targeting black youth.

“He did many things that we could not because he was untiring and completely fearless,” said former Toronto Star journalist Philip Mascoll, who has known Laws since 1981.

Laws had an admirable spirit, said Mascoll. “There are those of us who chose not to be activists because we have to raise families and do other mundane things. Dudley took all the risks for all of us. He fought city hall. And he didn’t care if he won. He made sure they knew there was a fight.”

In 1990, Laws called on then Premier Bob Rae to establish an independent body to investigate police shootings after Toronto Constable David Deviney was acquitted of the shooting death of Lester Donaldson during a confrontation. Donaldson was a mentally-ill black man. The Special Investigations Unit, which looks at all police shootings, was formed in the wake of the Donaldson killing.

“Clearly the man’s public life and a large part of his private life was dedicated to trying to ensure greater levels of justice,” said Toronto deputy police chief Peter Sloly. Although he says Laws’ approach was sometimes controversial and could be described as adversarial, “ultimately he . . . wanted to see more justice. I don’t think anybody could take away the intent behind it.”

“There were times when we had to agree to disagree,” says Sloly, “but in terms of the overall arch of his life and the arch of where we would like to go as a service, there was more alignment than there was less.” Sloly said that in his later years, Laws had been focused on helping troubled youth.

But he had his detractors. After Laws criticized police for the shooting and wounding of 16-year-old Marlon Neal in 1990, he was accused of promoting an “advocacy of violence” by Metro police chief William McCormack. And his motivation was questioned in 2003 by then Ontario public safety minster Bob Runciman, who said Toronto’s black community had to take some responsibility for gang violence.

Laws was born in Jamaica in 1934 and arrived in Canada in 1965 after living in England. He worked as a welder until the early ‘70s, and then ran a printing company before becoming an immigration consultant, a job he held until he was hospitalized.

His son, Robert Laws, says his father didn’t let his illness slow him down. Days before he was hospitalized, Laws was counselling inmates at Joyceville, a federal prison near Kingston, Ont. And Laws wrapped up a meeting with the Black Action Defence Committee in his hospital room just hours before he died.

“He was like my brother, my father. He was a mentor to me,” said Hewitt Loague, current president of the BADC. “I watched the way he dealt with people, just his overall handling of situations. Because of his work, changes (in policing) were made.”

Dudley Laws leaves behind his wife, Monica, and five children. A public funeral will be held, with arrangements still to be finalized.