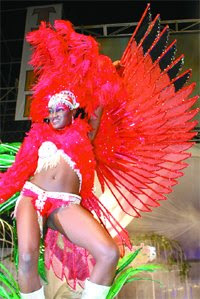 Antineil Blackman aptly characterised the spirit and splendour of the national bird, the Scarlet Ibis. PHOTO: SEAN NERO
BY SEAN NERO
Birdwatching took on an entirely new meaning on Saturday when mas band Tribe unveiled its Carnival 2009 presentation titled Birds of a Feather.
Featuring a collection of costumes themed after an exotic array of local and international species, the much anticipated public launch, held at Pier 1, located in Chaguaramas, seemed to satisfy scores of Tribesmen in attendance.
The Night Owl had no problem sharing the spotlight with the daylight birds as the Scarlet Ibis—one of our national birds—the Wild Parrot, Humming Bird, Flamingo, Caged Canary, African Lovebird, Golden Dove, Pheasant, Spangled Cotinga, Kiskadee and the Blue Tanager.
“This was a quality launch,” said Ian McKenzie, leader of mas band Genesis International.
He was in the company of wife Nina and friends who responded in the affirmative.
Kudos for Tribe’s delivery was not reserved to these principals of mas, however.
The general consensus among patrons was that Tribe exceeded expectations, not just with its mas concepts, but layout of facilities at the and pumping as much soca into the live presentation too.
The coming on stream of two new mas bands formed by ex-Tribe officials, who departed with knowledge of the band’s recipe for success caused the present executive pull out all the stops.
Ultimately, Tribe ensured that the Birds of a Feather delivered the quality punch which had been a consistent feature with the five-year-old band.
With Pier 1 transformed into a bird sanctuary, the quality exhibition exceeded 45-minutes but no one seemed to care.
Parading outside their natural habitat, these featured creatures delighted frenzied onlookers.
at July 28, 2008