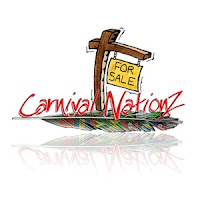 - Friday May 25, 2012 -: Dwayne Pitt, substantial share holder of the reigning Band Of The Year “Carnival Nationz Mas”,has announced plans of relinquishing his interests in the lucrative brand. Dwayne is currently in possession of 33.33% of the not-for-profit corporation.
Highly regarded within the International Caribbean Entertainment Community as a successful DJ and innovative promoter, Dwayne has become something of a pioneer. Earning his stripes back in 1994 under the DJ name “D’Bandit, he’s played an integral role in spearheading many, reputable promotional teams - “The Kingdom of Soca” and “Unite De Nationz Inc”.Most recently Dwayne has founded, “D' Bandit Enterprises” which hosts a series of iconic events - Redemption, Sunset, All Ah We, Memoirs of Soca, Aftershock, Carnival Bliss, Shine TO, Carnival Rehab.
As a co-founder of Unite De Nationz Inc., hub of the exclusive Carnival Nationz Mas Band, Mr. Pitt is to be recognized for his efforts in rearing the multi-award winning band. In a recent interview Dwayne defined Carnival Nationz Mas as a,“trailblazer!… One of few Toronto Mas bands that continuously evolve, proudly representing changing cultural expressions. Carnival Nationz is a success because we grow with our community and solidify trust.” With such pride for the Nationz camp, why is D’Bandit resigning?
”At this time I am looking to focus on my family and latest endeavor D' Bandit Enterprises”, says Dwayne. “Carnival Nationz rose from a humble concept to a fruitful reality. I’m secure in the Nationz foundation, which is why I can happily hand my reins over to someone that will continue to build on Carnival Nationz creative and cultural interests.
The sale of Mr. Pitt’s 33.33% controlling interests in Carnival Nationz Inc. has officially commenced. All interested parties are invited to submit a confidential, sealed bid to CNZbuyout@dbandit.com for consideration.
at May 25, 2012

I ask the question...how can you sell shares of a not for profit entity?
bandit...wheel and come again or get a better lawyer.

@Shana Marshall well i think he made a mistake......or did he? May be it's just time for him to move on good luck Dwayne.God Bless

He cannot legally sell shares because it is a non profit. He is just not wanted in the band and is trying to make money before they put him out. It shows you that what appears perfect on the outside can be chaotic on the inside. that band will not last much longer. They are now down to half of what they started with. (Remember there were 2 Eustace brothers and now only one)

Thank goodness.
I've wanted to play with Nationz for years, but after a disgusting encounter with Bandit and his "short man syndrome" I promised I would never deal with them again.
We shall see what happens next year.

Non-profit my a$$...
Ever since Nationz came in the game, the prices have sky rocketed.
Good riddance.